How to Monitor Your External Devices and Improve Your Alerts (pt.2)

Earlier this week we published the first half of this blog. The preceeding blog can be found here: http://blog.nettitude.com/how-to-monitor-your-external-devices-and-improve-your-alerts-pt.1

Being able to detect new malware infections or security breaches on a network or on a computer system without known signatures is always a challenge. We explore a simple and efficient solution to monitor external facing assets, such as servers, and we discuss the data that was collected during the experimental period.

In this experiment, Nettitude deployed an Internet facing Windows 2012 server that was configured for monitoring. During June 2017, over 5 million events were collected. Nettitude will explain the setup process and discuss the data collected that will ultimately lead towards a better monitoring system.

The following data was recorded between June 1st at 00:01 and June 30th 23:59 2017. When the windows server was fully configured, port 3389 (RDP) and port 80 (Microsoft IIS httpd) were visible to the internet. The full extent of how visible RDP can be was previously covered by Nettitude.

During the month of June 2017, Nettitude recorded 5,170,688 events. This is a considerable amount of data which would be difficult to try to understand if you were to use event viewer alone.

How to avoid false positive and tune your IDS/IPS

Throughout the month of June, 792 unique IP addresses were observed that visited the windows server. Nettitude observed a large variation in the number of visits from the different IPs. Table 2 below shows a breakdown of the interactions IP addresses had with the server. It is possible that the amount of time an unauthorised IP address spends interacting with your server may indicate what it is or what it is trying to achieve.

Table 2: Number of IP addresses grouped by their number of interactions on the windows server.

The software program masscan has the ability to scan the entire internet if it is just looking for one port within 10 hours. With this information alone, we could now build alerts to trigger if certain amounts of interaction are received from the same IP address.

Attacks originated from 73 countries. As shown in Figure 7, Europe, USA and Asia, specifically China, are well represented in the map. 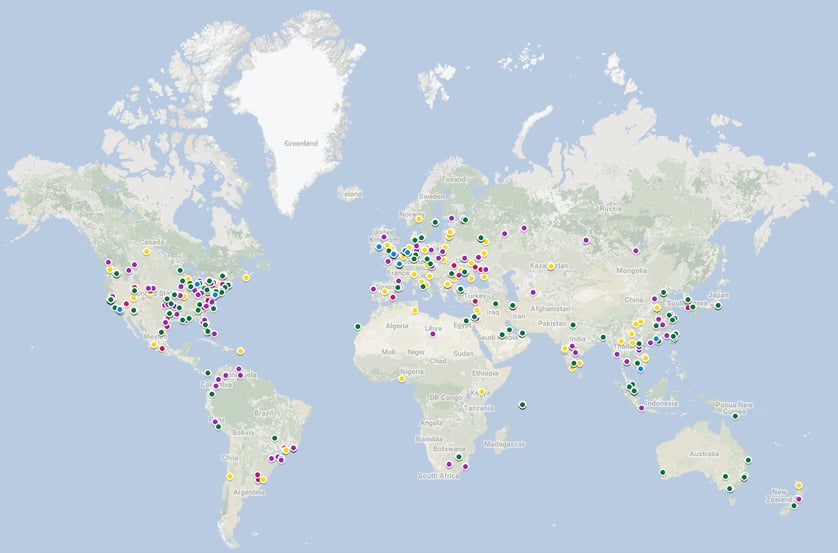 All major providers of VPS or cloud services were represented in the IPs used. As a consequence, VPS providers cannot be white listed for security purposes. All VPS IPs should be treated as suspicious.

Figure 8 shows the spread of IP addresses across the world with the highest amount of IP addresses coming from the United States. Altogether there were a total of 73 unique countries from which the 792 IP addresses were located.

As soon as the windows server went live it was possible to see the login attempt fails happening at a fast rate. The top ten login names used are shown in Table 3 below, including the amount of times they were attempted.

These numbers add up to 581,134 login attempts. Looking at this number doesn’t really sink in until you realize that this number represents the amount of times that a program or person has tried to login to your windows machine. That’s well over half a million in just one month.

From the data shown in Table 3, it is clear that a lot of threat actors spend time trying on find windows servers with the default username “administrator”. With the vast amount that can be gained from accessing an administrator’s account, this would be as good a place as any to start guessing usernames. Altogether 31,513 unique usernames have been tried against the server.

We analysed the usernames collected and we observed 71 different languages used. Администратор the Russian word for administrator was tried 926 times.  One lesson from this analysis is that hackers are aware that users may think that their passwords are unique because they are using a language different from the region they operate in. Such tricks would not work unless the passwords are sufficiently complex.

From the spread of languages in Table 4 it is hard to tell if we are being specifically targeted. It is safer to say that everyone, regardless of location, is a potential target. The top 10 languages used are seen in Figure 9.

When viewing event viewer, it becomes very clear that every event that happens on a windows system is given an event ID. These event ID’s are used as references to uniquely identify each individual event and catalogue them in to their event grouping.

Event ID 4,625 relates to an account failed login through RDP. As these are login attempts they directly relate to the usernames tried, with Figure 10 showing the spread of this data over June 2017. This graph also shows that there were between 15,000 to 25,000 login attempts per day.

Attack trends based on our web server IIS logs

We observed an increase in automated vulnerability scanners used by attackers. We recently published a blog discussing tools that were gathered from an attackers’ toolbox. Whilst phishing attacks are not as popular these days, attackers are using other ways to gain a foothold in a companies environment.

Setting up a monitoring system can be simplified given the right tools. From the data analysed it is important that companies must have continuous scanning in place to identify any vulnerabilities. Default settings should be avoided such as login names and directories. The system in this blog can be expanded to monitor multiple hosts by following the model in Figure 11.