Happy New Year to all of our readers of the Global Regulatory Frameworks Compared Series! As a recap, in recent months, we have been taking a deep dive into the different regulatory bodies that govern the cybersecurity requirements of the Financial Sector. One of the key issues we’ve covered is the misalignment of cybersecurity standards across the board, which in turn led to the introduction of a pan-European framework that could be leveraged across the whole of the Eurozone – TIBER EU.

While the UK and Europe have a fairly coordinated approach with the CBEST and TIBER Frameworks, Asia has a slightly different approach. In part 4 of this series, we’ll be taking a look at the iCAST Framework, governed by the Hong Kong Monetary Authority (HKMA).

How does iCAST compare to CBEST and TIBER?

The table below provides an overview of the main characteristics of the four frameworks driven by regulators (CBEST, TIBER-EU, and iCAST) and the Red Teaming approach put forward by ABS in Singapore. For the purpose of this post, we are focusing on iCAST in relation to the other frameworks. 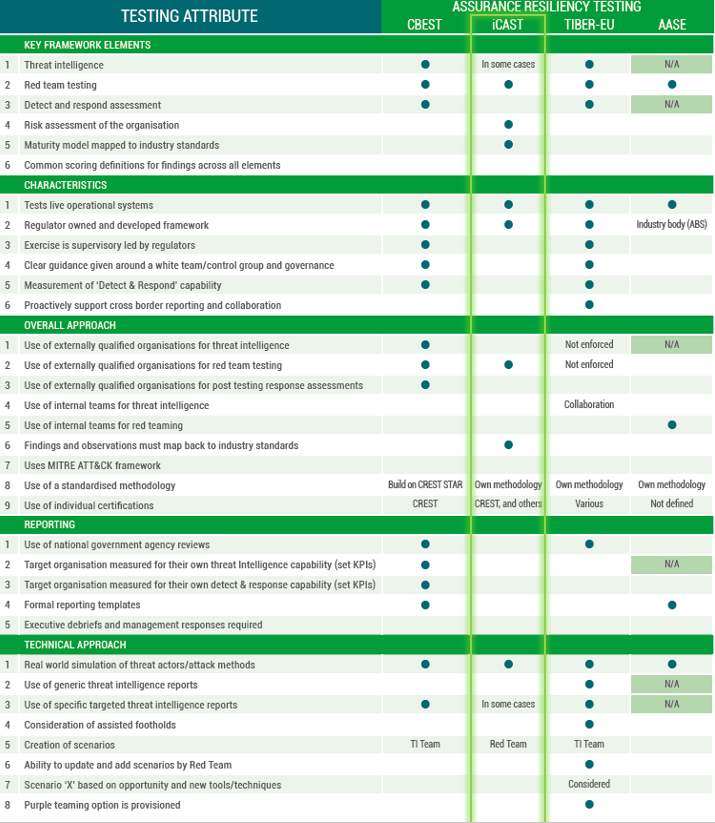 What is the current status of the iCAST Framework?

How can Nettitude help?

Since iCAST was first introduced several years ago, Nettitude has been engaging with global banks that are trying to protect their most important systems. Whether it’s delivering CBEST, GBEST, iCAST or AASE, Nettitude’s team are well placed to help organisations to deliver an end-to-end engagement, including Threat Intelligence and Red Teaming combined.

These services have been delivered using Nettitude’s in house tooling, as well a combination of open source tools to ensure that companies understand how best to protect themselves. Delivering a scenario-based engagement isn’t just about finding a way into an organisation, it’s also about helping companies to get better at defending themselves over a longer period of time, in case they ever experience a real-life attack.

For more information on approaching iCAST, get in touch with your local Nettitude team.

Previously In the blog Series:

Edition No.1 - A comparison of global regulatory frameworks – CBEST

Edition No.2 - A comparison of global regulatory frameworks – TIBER-EU

Next up in the blog series
Edition No.4 - A comparison of global regulatory frameworks – AASE

Edition No.5 - A comparison of global regulatory frameworks – a roundup of CBEST, TIBER-EU, iCAST and AASE.