The latest edition of our Perception report series is here, and it's packed full of information on the latest cyber threats, blockchain and advice about GDPR. It's free to download, and is a handy guide for those working in the finance sector. Here is a short summary of what you can expect to find in the report. 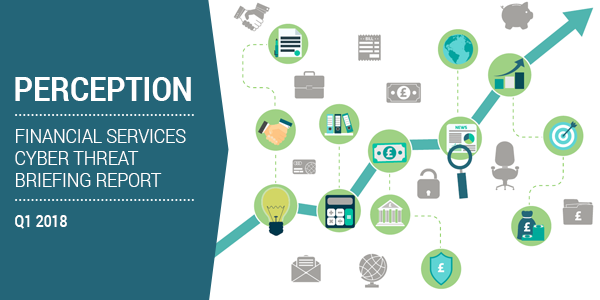 Cybersecurity remains the top risk to financial sector stability, U.S. policymakers said in December 2017 in the first Financial Stability Oversight Council risk report under the Trump administration. The council—a group of senior officials overseeing the financial system—recommended the creation of a private-sector council composed of top executives in the financial industry that would correspond with regulators on cybersecurity issues.

Brexit could cost up to 75,000 jobs in financial services

The BoE believes that up to 75,000 jobs could go within the financial services industry because of Brexit, the BBC reported in October 2017. The broadcaster reported that the Bank was using the 75,000 number as a “reasonable scenario”, based on a situation under which no specific financial services deal is made between the UK and the EU. The BBC also reported that the number could change depending on the final trading relationship agreed between the two sides. Many jobs would move from the UK to the continent

Ransomware is profitable for criminal groups. Its dramatic rise has been seen across many sectors, including financial services. Its unique ability to impact operations makes it currently one of the most feared attack vectors amongst businesses.  Wannacry and NotPetya demonstrated the ability to connect a simple ransomware malware with a highly capable infection technique to significant effect. Good backups and the ability to recover quickly are essential. Paying ransoms still fuels the approach being taken by attackers as they are left realizing the attack has been successful. Nettitude has witnessed subsequent attacks against customers that have opted to pay ransoms to criminals.

Download the report for free by clicking on the button below.