On a recent web application test I found functionality which parsed user submitted data for URLs. In the background, the application performed a lookup of the “whois” data for the host portion of that URL using the “phpWhois” library.

As there is no standard format for whois data, one of the advantages of using a library such as phpWhois is that it parses all possible whois formats and outputs them in a uniform manner so that for example, if you specifically wanted to extract the technical contact email for a domain, this could be done easily by referring to a key called “technical_contact_email”.

phpWhois returns the detailed information contained within a whois record by constructing a relatively complex data structure consisting of a keyed multidimensional array of values. The below screenshot shows a section of returned data which shows contact information for the “tech” contact of a domain. 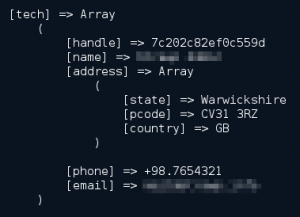 Unfortunately, in order to construct these complex data structures, phpWhois uses a very risky built-in PHP function called “eval”. This function will evaluate any execute any PHP code passed to it, but by allowing untrusted data to pass into this function, PHP developers often open themselves up to attackers being able to run any code they wish.

Figure 3 - The vulnerable line of code in phpWhois

For phpWhois, the untrusted data being passed to the “eval” function is a line of a “whois” record. The library loops over each line, adding the record data into an evaluated statement as a string. In order to ensure that the record data is a string and that it can’t be prematurely terminated in order to achieve code execution, any double quotes are escaped using a backslash (‘’) character. This means that the “eval” function sees the double quote only as a string literal double quote and not the end of the string.

This is the only protection in place to ensure that untrusted data is not executed by PHP and unfortunately it can be bypassed simply by starting a whois line with a backslash, then a double quote (‘”’). This tricks PHP into assuming the backslash added by the library is a string literal backslash and that the quote is the real end of a string. Everything after that is parsed as executable code.

Figure 4 - A malicious payload in a whois record

The malicious whois data does a number of things:

After phpWhois has parsed this record, it should have written a “web shell” into the application path. This can then be accessed by passing operating system commands to the URL parameter ‘c’.

Table 4 - After parsing the malicious whois record, a web shell is written to the application

Once the web shell was installed, I had unfettered access to the application source code and database, the underlying operating system and could use the web server as a pivot into the internal network.

This vulnerable code was found to be present in both the original phpWhois on Sourceforge and a newer fork of phpWhois on GitHub. Developers for both projects have been contacted. The Sourceforge project has a fix already in place.

Often when we think about malicious input to a web application, we consider only data that is being sent with the request itself, however as this attack shows, any external input consumed by an application could be used to attack it.