‘Houston, we have a problem…’

The operational resiliency of the financial services sector is of paramount concern to governments and regulators across the globe. A catalogue of high-profile breaches suggests that board level engagement and awareness of how to prepare and respond to a cyber event is frequently misunderstood or inadequate. Although these boards believe that they are taking steps to combat the cyber threat, their strategies are frequently poorly grounded and misaligned.

To address this, a number of regulator-driven frameworks for assessing financial institutions cyber preparedness, protection, detection and response capabilities has matured, and proliferated across multiple regions around the globe. In this five-part blog series, we’ll outline the main regulatory frameworks for the UK, Europe, Singapore and Hong Kong. In the first post, we’ll take a look at the UK’s regulatory framework – CBEST.

In 2014, a more proactive stance was taken by the BoE and the Financial Conduct Authority (FCA), who asked CREST to develop a standard that could be used to test operational cyber resiliency within the systemically important financial infrastructure of the UK’s financial system.

This brought into existence the STAR (Simulated Targeted Attack and Response) framework that then became the basis on which CBEST was built. The CBEST framework aimed to deliver regulator driven bespoke intelligence-led cybersecurity testing within the UK financial sector against live operational systems. The need to understand the real-world risks was essential and therefore a robust risk management process was built into CBEST from the outset.

The CBEST framework set out to achieve the objective of increasing the UK Financial Sector’s resilience to cyber-attack, but also support the following:

The 3 Phases of CBEST Testing

What are the Results of a CBEST Assessment by Nettitude?

CBEST is not a pass or fail exercise, but it produces a series of learnings and recommendations, which are to be presented back to boards and senior executives as well as the regulators. Post-test follow-ups are then managed through normal regulatory interactions/channels.

The below diagram outlines the CBEST process – 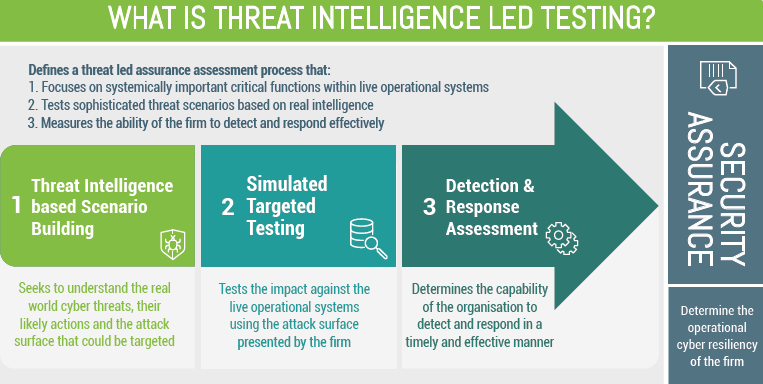 What is the Time Scale of a CBEST Assessment?

The CBEST framework highlights that the phases only represent a logical review of the tasks and there will be significant overlap. There is scope for activities to start earlier and run in parallel with others in order to increase efficiency, given the limited timescales of the assessment. The overall engagement time-frame between launch and supervision can vary considerably but is outlined as approximately twenty-two to thirty weeks.

Figure 3 presents a more realistic depiction of a physical project plan to complement the logical phases. 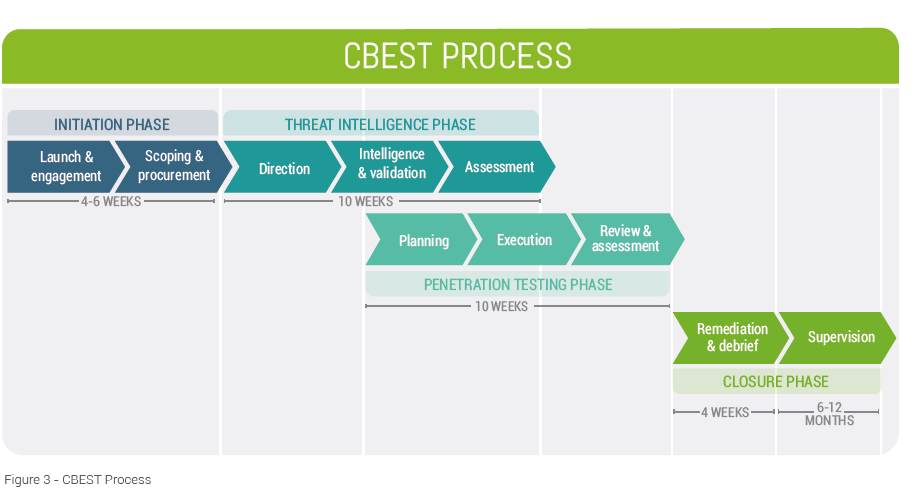 How Should You Respond to CBEST Requirements?

Cyber-risks have been traditionally hard for executives and organisations to understand due to the highly technical nature of the events and the obscure language used to describe and explain them.

Organisations that have been through threat led simulations and have experienced first-hand the likely impacts of a cyber-attack are characterised by a step change in understanding, appreciation and realisation of the potential impacts.

Nettitude would encourage all organisations, financial or other, to support and embrace a threat led assurance process, as depicted in the emerging regulated standards.

Need more advice, contact our expert team for a no obligations chat around how we could help you prepare to meet CBEST requirements, or find out more about our CBEST Penetration Testing services.

Next up in the blog series:

Edition No.2 - A comparison of global regulatory frameworks – TIBER-EU

Edition No.3 - A comparison of global regulatory frameworks – iCAST

Edition No.4 - A comparison of global regulatory frameworks – AASE

Edition No.5 - A comparison of global regulatory frameworks – a roundup of CBEST, TIBER-EU, iCAST and AASE.